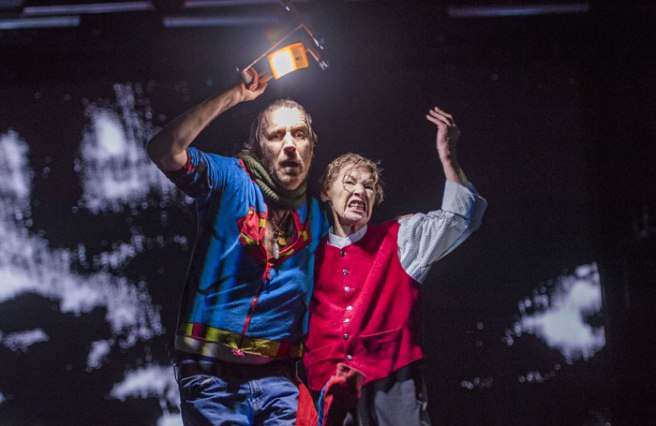 And so out they come and stand in the spotlights to two rounds of standing ovations. I stand up to put my coat on and leave, no one will miss my feeble claps amid the din of whoop whoops.

What have I missed? Why does Glenda and her stellar crew leave me numb? There was nothing in this production that was any better, to me, than any of the productions I’ve ever seen. There was much that was was unnecessary at best; at worst, a smutty distraction from the glory of the text.

But this audience and no doubt the packed house watching tonight, lapped up every drop of mostly dreary, conveyor-belt delivery, washed down with large glasses of “shocking” nudity, loud “atmospheric” music and stark lighting that, from a purely practical perspective, made long tracks of the best scenes, however loudly throttled out,  almost  inaudible, let alone moving.

The best thing about it was the digital display overhanging the stage, telling us what act and scene we were on. I found myself looking at it more and more with that sinking feeling you get when the next bus isn’t for another 25 minutes, finding myself hoping there’d been a tech hitch and the final scene was already “due”.

In contrast, the Barbican’s Anthony Sher-led production was the triumph that critics should hail as one of the best  since John Hurt and Timothy West,and,  I’d say, better. But for Anthony and co, there was no standing ovation. 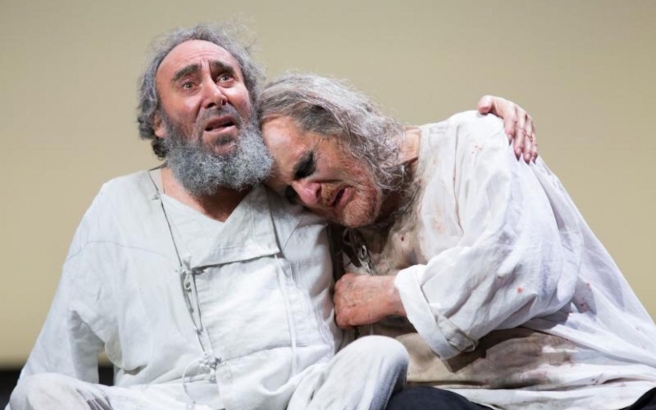 Why? Because it was a great tragedy. We should all be highly suspicious of any tragic play that leaves you with enough energy to get up afterwards, let alone smile, clap and chat to your neighbor about how good it all was, not least Glenda.

Sher and his troop, through 5 acts and almost 3 hours , truly suspended my disbelief. Not for a half line did I look up to see if the scene’s ticking was digitally indicated overhead. Not for a second did I think I am here watching a load of celeb actors reciting Shakespeare like it needed their help, another language peppered with the odd ‘top ten  catchphrases of all time”.

No, unlike Deborah Warner’s Old Vic production, Gregory Doran’s Barbican show was life, on stage, and we were on it too, with the actors, just as Shakespeare intended. Every line had its own intrinsic timeless resonance, which was then expanded, sometimes creating new and unusual contexts, sometimes merely amplifying well-known interpretations, always keeping us hooked.

The props and scenery at the Barbican worked to evoke a sense of the play’s contexts, amplifying subtly, never clumsily varnished on for ‘effect’, always using and trusting the weight of voice and text. I won’t say how or carry on with any comparisons. Anyone who sees it should come at it fresh. You’ll leave utterly drained yet uplifted.

The Barbican’s production was the best I’ve ever seen, the Old Vic’s one of the worst. But that’s just me and most may disagree, I’d just say, ignore the media hype around Glenda and take advantage of the fact Sher’s reigns on at the Barbican until 23rd December