..is a fable told by the Homer of modern cinema, Quentin Tarantino. With a pantheon of Hollywood gods, heroes and harpies, he weaves a dreamlike tapestry in vivid, acid-dipped tangerine, chocolate, fuchsia and blue, bringing it home with the blood red signature we have come to expect from all things Tarantinoed.
It’s as perfect a vehicle for Brad and Leo as you’ll see. Two actors, perfectly balanced on either side of a ’66 cream Cadillac. They reel you in, you are totally thrilled that they let you hitch their ride. You are safe with them, they tell a good story.

Brad keeps everything on the road with his cheeky charm and rusty biceps. Leo draws you in, fools you, again, into thinking he was born to play this part and only this part, forget Gilbert Grape, Romeo, The Great Gatsby or Wolf on Wall Street, this is the one. He is the not-so-has-been cowboy actor Rick Dalton, the fictitious star of TV western ‘Bounty’ that Quentin wants him to be. The year is 1969. It’s summertime, “The goddam hippies are everywhere”, and they’re higher and darker than they’ll ever be again…
I watched this, and heard it’s brilliant, Neil Diamond-studded sound-track with my mother, who’s of the right vintage to remember it all, as though the 60 years between were just another LSD trip. She said she was moved, which is as sound a seal of approval as you’ll find, she’s been there, lived that time, time when a cigarette was your index finger and a maraschino 🍒 was the definition of ever so tacky decadence.
If you’ve not seen OUATIH yet, stop now/burn after reading, the next paragraph dramatically spoils the fun, but is a must-read once you’ve seen ‘OUATIH’. 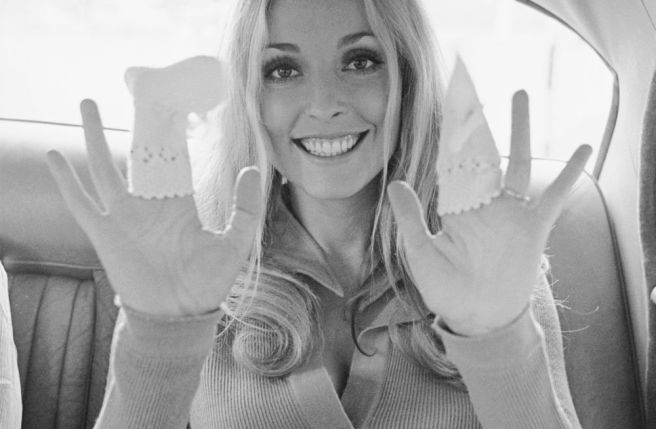 And so we come to Sharon Tate, played by Margot Robbie, the wife of Roman Polanski, is a smiley feet-dangling side-show to Leo and Brad’s shenanigans. She is introduced as the unattainable love-interest, lusted after by blonde gods like Steve McQueen but faithful to her beloved Polanski. We are waiting for her to be brought into the Tarantino action, like a Thurman, to bathe the baddies in blood, but she remains protected, innocent, like a doodle daydream in the margins. Why? Does Leo really get the girl in the end? He’s invited into her house and seems pleased – but maybe it’s just because it brings him closer to getting that Polanski part he’s always dreamed of.
Tarantino has not only cut but changed what really happened in the end. Those of you who are 70, you already know the twist, you know who Sharon Tate was and how she, her unborn child and 4 other house guests were mercilessly murdered by the Manson cult members in what was labelled “the most horrific crime in modern history”, in Polanski’s own house. Why has Tarantino changed this? It feels right, it feels good, to see the evil doers go up in laughable flames, to feel the trauma averted, healed. The hippies are bad, but their evil is left at a superficial level, they are overcome, unlike the truth of the gory Manson murder. Tarantino explains, in his interview with Empire:

“I was just getting ready to do a deep dive, and all of a sudden I was just like, ‘Let me stop before I get started on this – do I really want to let the Manson family into my head, into my psyche? Do I really want to think about where they were all coming from?”
And so he didn’t. I wonder how Polanski feels, in his exile, maybe he is pleased to see the trauma erased, to see what might have happened in a better scenario, see the past rewritten. Or maybe he is angry at the near-farce of Tarantino’s horror, at the uncanny reimagining of his long-lost wife and unborn child.

Tarantino’s offering comes out with a couple of other films to mark the anniversary of Tate’s demonic murder. And for the first time her family have spoken out about it.

As someone going into the film without any idea who she was and how she died, I would have left it none the wiser, were it not for my mother filling me in. Now I do know, I find the absence of her death in the film a fitting memorial, leaving her spirit undisturbed, allowing it peace and safety, if not in reality, at least in the collective consciousness, which must surely be a good thing?